Prepare your teen driver by practicing on a variety of roads, routes, and conditions. In 2019, nearly half (47%) of teens killed on North Carolina roads were unbuckled at the time of the crash (NCDOT).

Scroll down for tips and guidance on the North Carolina GDL program, supervised driving, and the 5 to Drive.

How can I prepare my teen driver for safe, independent driving?

The National Safety Council provides free lessons for parents of teen drivers. Sign up on their website at: nsc.org/driveithome/pointers-for-parents

Tips: Behind the wheel – Supervised Driving

Ride with your teen driver in a variety of situations and roadway types, including nighttime driving, driving in rain, rural roads, highways, etc.

Give advice from your own experience

Use “I” statements to explain how an experienced driver handles the road.

Ask your young driver higher order thinking questions, which will help them to anticipate risky situations and predict what other drivers may do.

Higher-order thinking can help teach your new driver to think critically about potential risks and how to avoid dangerous situations. Anytime you are in a vehicle with your young driver, ask high-order thinking questions…

What is different about driving conditions during a sunrise or sunset?

Discussion: Drivers who are traveling toward the sun may have a harder time seeing things the road. During this time of day, never assume that a car can see you.

How can you tell if someone is driving distracted?

Discussion: Swerving back and forth in lane. Traveling for distances while straddling two lanes. Running off of the road.

If you suspect someone is driving distracted, what should you do?

Discussion: Stay away from the swerving vehicle as much as possible, while still maintaining a safe speed.

Why should you leave space between your vehicle and the vehicle in front of you?

Discussion: The distance between you and the next vehicle is how much space you will have to stop in time. If you follow too closely, you risk hitting another vehicle.

How do you spot an aggressive driver?

Discussion: An aggressive driver may be speeding and tailgating other vehicles. Anticipate that he or she may try to cut in front of you in a relatively small space. Don’t try to “block” aggressive drivers, instead, give them more space and try to be patient.

Anytime that your young driver goes out, ask about rides and who will be driving. Research shows that riding with other teen drivers is risky and additional passengers only add to the chances of a crash.
Utilize free safe driving apps to monitor driving when you are not in the car.
TrueMotion tracks distractions, speed, aggressive driving, and other behaviors that may put your young driver at risk
Before handing over the keys, discuss and enforce the 5 to Drive (see below).

Enforce the 5 to Drive

Discuss these rules (developed by NHTSA) with your young driver before handing over the keys.

Lead by example by following these rules as well.

Remind your teen that drinking before the age of 21 is illegal, and alcohol and driving should never mix no matter your age.

If you wear your seat belt every time you’re in the car, your teen is more likely to follow suit. Remind your teen that it’s important to buckle up on every trip, no matter how far or how fast. 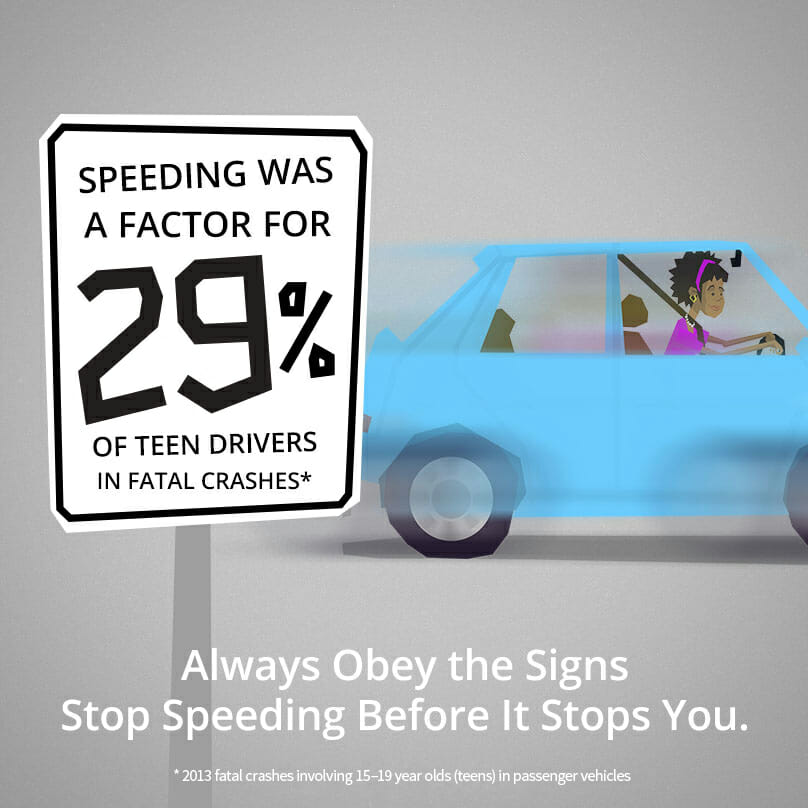 Drive the speed limit and require your young driver to do the same. Every time speed doubles, stopping distance quadruples. 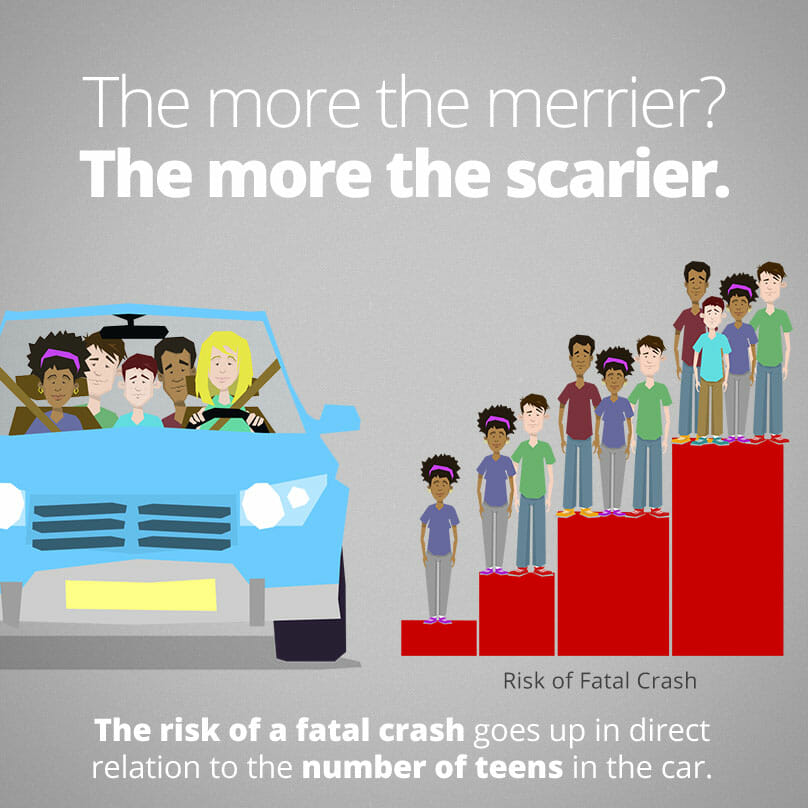 With each passenger in the vehicle, your teen’s risk of a fatal crash goes up. Don’t allow your new driver to ride with more than one passenger unless you are also present in the vehicle.

Learning how to drive? Awesome. Unfortunately, the first few years of driving are often the most dangerous. It’s important to be aware of the risks you now face behind the wheel. But don’t be discouraged. You have the power and ability to keep yourself and your friends safe by following these guidelines.

Before driving – make sure you follow the “5 to Drive”:

Is someone driving dangerously?

Speak up. Passengers accounted for nearly 1/3 of all traffic fatalities in the U.S. in 2013 (IIHS). It is your right as a passenger to speak up if you feel unsafe.

In any vehicle that you occupy, you have the power to prevent a crash. Empowered Passenger.

“You’re making me nervous. Can you slow down?”

“I’ve seen a lot of cops pulling people over today— you may want to slow down.”

“A friend of mine got in a bad wreck and I really don’t want to go through what she did. Can you please pay attention to the road?”

“I can’t believe that person is tailing that other car! That’s a wreck waiting to happen.”

Use facts. Try These:

In North Carolina, new drivers between the ages of 15 and 18 must complete the NC Graduated Driver Licensing (GDL) program, which consists of driver’s education and two levels of permit restrictions preceding a full provisional license. Driver’s Education is provided in all 115 school districts in North Carolina and is available to all public, private, charter, federal and home school students enrolled in the state.

For a simple summary of the GDL program, click here.